The seniors last day of classes is this Friday and we essentially finished the content in Calculus last Friday.  With only 4 classes remaining, I spent the last two days showing students the documentary called "Between the Folds".  It does a great job looking at how origami blends with math and science.  It also shows that math can be learned for the sake of learning math and that applications of the math often come later.  Here is the trailer for the video:

In the video mathematics professor Eric Dermaine shows that paper can be folded and one cut made to make various shapes.  In the video, Eric folds a piece of paper and makes one cut to reveal a swan.

After the video, I worked with students to fold paper and make one cut to form a five pointed star.  The same fold and cut trick that Betsy Ross supposedly showed George Washington when the American flag was being designed. Here are the directions we used.  My five pointed star is seen below.  We also explored mobius strips and what happens when you cut a mobius strip 1/3 from the edge of the strip and in the center of the strip. 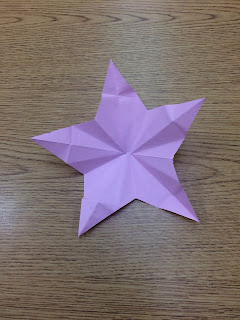