The Writing on the Desk: An Apology for my Silence

Please note: The language I am sharing in this post was used by one of my students over twenty-five years ago. The purpose of this post is to reflect on a personal exprerience from may past and make suggestions for what educators can do moving forward.

The year was 1995 and I was teaching math at Ames High School in Ames, Iowa.  It was my

A flood of thoughts raced through my mind, "What do I do? How long had this been written on the desk?  How many students had seen it?  Was it written on other desks?"  I recall quickly walking around the room and checking each desk.  After I saw it was only on the one desk, my thoughts changed to "I can't let other students see this. I need to remove this vandalism from the desk immediately."

I can't recall where I found the products I used to clean the desk, but I do remember scrubbing vigorously and checking several times to make sure the words could no longer be seen.  I had erased the words and thought I had solved the problem.  The desk was clean, but the problem was still there.  I had removed the vandalism, but I did not address what had led to that vandalism.

At the time, I thought I had done the right thing.  I was protecting my black students from being exposed to that vile language and I was preventing those words from being viewed and used by my white students.  I now understand that by not saying anything to administrators or my students, I contributed to the racist undercurrent in the school and my classroom.  And if you were a black student or black teacher at Ames High School in 1995 and you are reading this post, I am sorry that I did not speak up.  I am sorry I did not recognize what my silence meant.

So, what can we do as educators?  I am not an expert on this, but offer a few thoughts.

1) Train educators with what to do and say in response to racism and intolerance.  Train us to listen and train us on the ways we can support marginalized students.  Posting platitudes around the school like "we care for our students" and "your education matters to us" is meaningless without the tools teachers need to promote change and have difficult conversations.

2) Find groups that work to actively support anti-racists practices in education and share your experiences and expertise within those groups.  If you are looking for some ideas, check out the link to the recent statement posted at The Global Math Department.

3) Don't relegate teaching of black history or marginalized groups to one month of the year or a specific week or a single assembly to check off a box. Doing that is like saying, "Look here. We didn't forget about you. Problem solved."  This doesn't come close to doing the hard work that needs to be done.

Two weeks ago I was on spring break. Had you told me that I would be teaching online and not likely to see my students again for the remainder of the semester, I would not have believed you.  But here we are.

For the last week, I have been more exhausted than I have been since my daughter was born.  You know the good old days when you child would not fall asleep easily and then you would lay down in their room and fall asleep on the floor?  I adjusted to using Zoom for teaching my college classes. I learned how to do breakout rooms. When the students were taking their test in Canvas and they couldn't see the images, I scrambled and posted the images in the chat. The students who were absent received individual emails to check in on their health and well being each day.  Some are struggling.

I have always said I am a teacher first and that my subject area is math.  Three-fourths of my students were scheduled to take a test tomorrow.  About 90 minutes ago, the governor of Pennsylvania said that non-life-sustaining businesses are to be shut down as of 8 PM tonight.  My college students need to be out of their dorms in 24 hours.  Some have already gone home, but not all.  I know they are confused.  They want to do their best.  They feel conflicted.  They are emotional.  They are worried.

Here is what I sent to them through our class announcements about 10 minutes after the President sent the email saying that college students must leave their dorms in the next 24 hours and go home or to a place they consider safe.

My college went from Tier 1 to Tier 5 of our response plan in less than 10 days.  I am still shellshocked.  For all the other teachers out there, accept it.  Your teaching won't be the same.  Your students aren't the same.  They won't remember any (or very little) of the content that you might teach them over the next 2-3 months. Lower your standards now.

On my first day of class, I wanted to set the tone that all students are capable of learning mathematics.  This can be a hard sell in a "Business Calculus class", especially with juniors and seniors that have been removed from a math class by 4 or 5 years.  To help students see that the characteristics of a person who is good in math are actually achieveable by everyone and within their control, I took a lesson from the playbook of Howie Hua.  He sent out a tweet a few days ago about this activity.

Step 1: Instruct students to think of someone they know who is good at math.  The person could be a family member, sibling, friend or classmate.  But it had to be someone they knew.

Step 2: Think about the characteristics that person has that helps them to be good at math.

Step 3: Have students work together to compile their list of 5 characteristics.

Step 4: Display the lists in the room and ask students what they notice about the lists.

The lists generated by one of my classes is posted below. 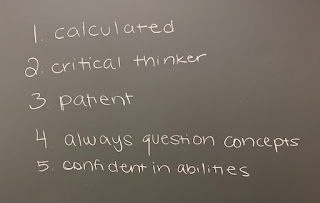 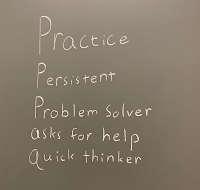 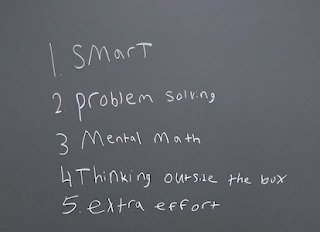 We had to unpack what "Calculated" meant in the first group.  They described it as being organized and thoughtful about how they approached problems, a "calculated approach".  We also discussed "thinking outside the box".  This is partly seeing things from multiple approaches and can be improved with practice.

In my second class, we put the responses on paper and looked at them under the document camera.  That class had words like focused, organized, hardworking, determined and diligent.  I pointed out that these are characteristics that can be developed by anyone and that means they were all capable of becoming better math students.

I also told the story about my first math quiz grade in college - it was a 50%.  And I mentioned that I went to speak to the professor right away about that grade and then worked hard to understand the material in the course, looking for patterns in the problems, doing extra problems and working with friends.  The lowest quiz grade in that class was dropped and that was my lowest grade. I ended the class with a B+, because I put in the extra effort and got help when I needed it.

Today I had a student find me to check his work and he told me that exercise in class made him realize he should start working early and it motivated him to come in for a little help.  I also had another student email me about coming in for help.  She admitted that math has been very challenging for her in the past, but she wants to work.

So, thank you Howie for a great opening day activity!  And if you don't follow Howie on twitter you really should.
Posted by S. Leigh Nataro at 4:53 PM 2 comments: