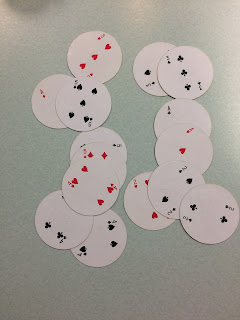 If I allowed my students to choose the people to be in their group, they would choose the same group almost all the time.  And there might be some students that wouldn't get chosen - the mean kid or the bossy kid, for example.  The quickest way to randomly put students into groups is with playing cards.  Today I had 14 students in Calculus.  I used 15 playing cards (3 Aces, 3 Twos, 3 Threes, 3 Fours and 3 Fives) and once the cards were distributed there was one card left over.  It was a five.  That meant that the group based on the cards with Fives only had two people in the group.  Student then worked on solving problems at the board in their groups.  Quick and easy!

Bonus tip: If you are looking for a bunch of playing cards, I have been told by a workshop attendee that you can often get used cards from casinos.  Apparently they drill holes in the deck once they are done using it.  The cards are still good for use in class and the casinos give them away for free.