Today I talked to a student about the fact that he was a bit tired.  He had asked to go to the restroom and when he returned he admitted that he really was just walking around to wake up a bit. Then, he went on to describe his very busy day the previous day and mentioned that he did not get to sleep until 2 AM, which was not that much later than the 1 AM he was accustomed to.  It doesn't matter how engaging my lesson is. Sleepiness will win - always.

This student was not necessarily an atypical student.  Below you will see a graph showing the hours of sleep my students said they got on the night before school started.  Yes - BEFORE school started.  There was no reason for them to be up late - no tests to study for and no homework to complete.  (Note: This graph is a compilation of several years of data.) 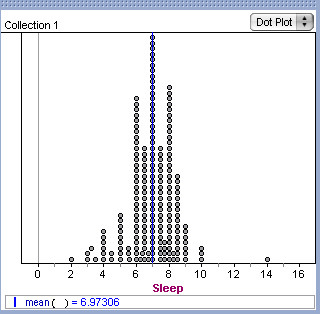 According to Nationwide Children's Hospital, teens need 9 to 9.5 hours of sleep each night to function and the average that teens actually get is closer to 7 to 7.25 hours.  How did my students do?  The mean for the distribution is marked on the plot at about 6.97 hours. In addition only 11 of 206 students got 9 or more hours of sleep.  That's about 5%!

I see students caffeinated and drinking Monster energy drinks frequently at school.  Some skip school to catch up on their sleep.  Others take naps in the library.  You may think the student that got 14 hours of sleep is doing well.  However, I know that the student that gave this value is the same student who is often seen with an energy drink in his hand at 8 AM.  The 14 hours was probably to make up for sleep deprivation.

Clearly something needs to be done to make students aware of the damage that sleep deprivation can cause.  Many think that staying up late studying will help them perform better, when in fact it is just the opposite.  This is not a problem that I can solve alone, but it is a problem that needs to be addressed schoolwide.  If you have addressed this problem at your school successfully (or even unsuccessfully), please let me know what you have tried by posting a comment about it.

Now it is time for me to take my own advice and get some rest.