I have seen WODB posts and ideas on twitter and today I tried out my first one in class.  For those of you who are not familiar with the acronym, it stands for Which One Doesn't Belong.  We had just finished reviewing the discriminant on Friday and I used this WODB as my opener for class. 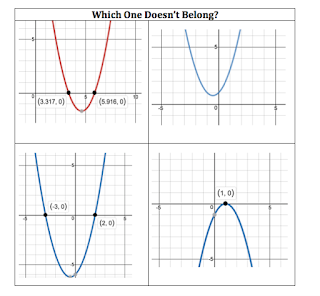 I asked students to think which one didn't belong and why.  Then, I called on Christian and he said the one in the top right.  I asked for a quick show of hands to see who else felt the top right was the one that didn't belong.  Almost all the hands went up.  When I asked why, Christian said, "It has no x-intercepts and that means it has a negative discriminant.  All the other ones have x-intercepts and discriminants that are not negative."  After that we had a brief discussion as to why the other graphs might be the ones that don't belong.  One student pointed out the the one on the top left was printed in red ink instead of blue ink.  (This was intentional on my part.)  This was definitely a fun opener, but next time I might assign each table one of the four graphs to create a justification for why it doesn't belong.  Note: Shout out to Desmos for the awesome graphs that made this WODB possible.
Posted by S. Leigh Nataro at 10:52 PM