Yesterday in Calculus we did a card sorting activity in Desmos that focused on linear and non-linear equations and linear and non-linear tables.  We began class today by talking about the importance of using precise language in math.  We critiqued the first answer seen here that was given by one pair of students. The summary question was "How can you determine if an equation is linear or non-linear?"

Next, we critiqued the word "exponent". One student said that it wasn't clear that the exponent is to be on a variable.  He gave an example of y =32x and the class agreed that this was linear, even with the exponent on the 3.  A second student pointed out that even linear equations have an exponent; it is a 1.  At this point, we discussed the form of the line that was used in the card sort activity, which was slope-intercept form.  Many students used this form to identify the linear equations.

After a discussion of domain and range, we did a different card sort activity.  There are 16 students in my class and each student was given an index card.  The white index cards had a domain and range listed and the blue index cards had a function listed.  So, there were 8 pairs of cards.  Students were told that they had to get up and move around and find their partner.  Once students found each other, they had to write the information found on their index cards on the board.  When we were done, we had 8 examples of functions and their domains and ranges displayed around the room to discuss.  We reviewed each of them and found one error.  The range of y=1/x and y=1/x2 were reversed!  This gave us a 5 second penalty.

The table below shows the 8 functions I used and their domains and ranges.  Tomorrow Mr. Galitsky's Calculus class will be doing this activity.  Will they be able to beat our time of 2:06.91? 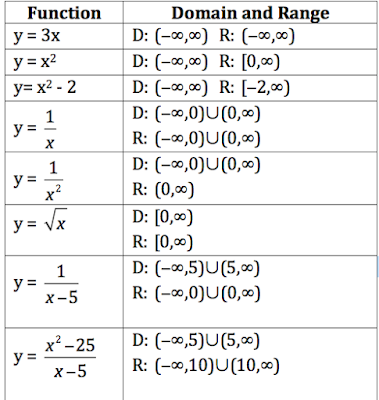