In my Calculus class, we do a unit on probability.  Today, I decided to teach circular permutations by talking about bracelets. Each student was given 4 beads (black, blue, white and gold) and a piece of string with the question "How many different bracelets can be constructed with 4 different color beads?"  I should have had students spend more time struggling with this a bit themselves, but for the sake of time I asked one table to give me an ordering and I wrote it on the board. 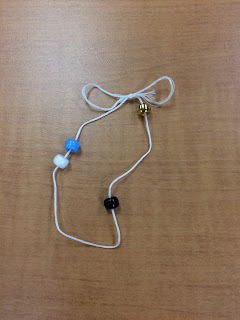 One possibility is shown at the left.  Then I asked if anyone had something different.  We gathered 3 different bracelet orderings on the board, and then I did too much talking.  Rather than having a student point out that flipping the bracelet over didn't really produce a different bracelet, I showed that to the students.  They could see that the colors were still in the same position relative to each other, but to name the colors in the same order, we would be going in the reverse order around the bracelet. (clockwise vs counterclockwise)  I should have had students work together to come to this conclusion.

It was also at this point that I realized that the bracelet was actually a step beyond a simple circular permutation and the moment for deriving the formula of n!/n  or (n - 1)! had passed.  Although the students may have enjoyed this activity, I will likely try something different next time.  Rather than work with bracelets, I'll divide the students into groups of 4 and see how many ways they can arrange themselves in a circle.  This would get all students actively involved, talking and thinking.  Plus, I think the physical movement of realizing that rotating one spot doesn't change the order of the people (or beads) relative to each other would be more apparent.