Last Friday, I found the following announcement in my inbox: 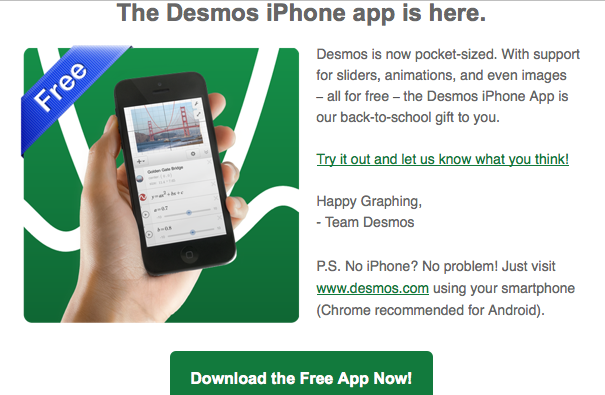 If you could have seen me jumping around, you would have thought I just won a bunch of cash.  But for math teachers, like me, Desmos is better than cash - it's a type of math gold.  (Or at the very least, it can help my students feel like a million bucks, as they discover math ideas for themselves!)  Giddy with excitement, I couldn't get the app on my iPhone fast enough!!  I had tried to show Desmos to some collegues back in June of 2013, but could not really show off its power on my iPhone.  Now I can show off Desmos to those colleagues at the holiday party in December!

So...what does Desmos look like on my iPhone??  Click on the image below or the phrase "Demos for iphone" under the image to watch the screencast and see for yourself. 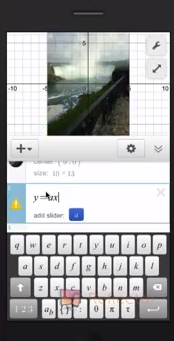 The iPhone version is great, but there are two benefits to the online version of Desmos that are not part of the iPhone version - being able to save your work and access to the "file cabinet" of Desmos demonstration files.  This past summer I had students explore demonstration files on equations of circles, because they wanted to add circles and semicircles to their projects.  In less than one minute, I opened the Desmos demonstration file on circles and the students figured out how to create circles and semicircles from equations with no verbal input from me.  Yes - I would say that the Desmos app for iPhone is almost better than gold!

(Note: This blog would have been posted sooner, but it took me a while to figure out how to create a screencast of my iPhone screen without jailbreaking my phone.  I ended up using an iPhone with ios 7 mirrored to my MacBook Air.  Mirroring was done by using Reflector and screencasting was done by using Screencast-o-matic.)
Posted by S. Leigh Nataro at 9:53 PM