Although I have probably taught trig ratios (sin, cos and tangent) 2 or 3 times each year for about 15 years, I was never really satisfied with how it turned out.  Yes, students could parrot the definitions and find sides and angles until the cows came home, but did they really understand why the sine ratio was always a certain number for a specific angle?  I was doubtful that the big picture was being understood...until today!  OK...I am still not satified with the entire lesson, but I think it was better.

As much as possible, I want students to construct their own knowledge/understanding of concepts with my guidance at the side.  In the past, I would have them draw right triangles that were similar, measure segments and calculate various ratios. (See handout below.)  But guess what the problem was.  Yes, that is right.  Inaccurate measurements led to the ratios not being equal and me saying things like "Well, the ratio 0.75 is pretty close to 0.76.  So, close that if you had measured accurately, I bet they would be equal." 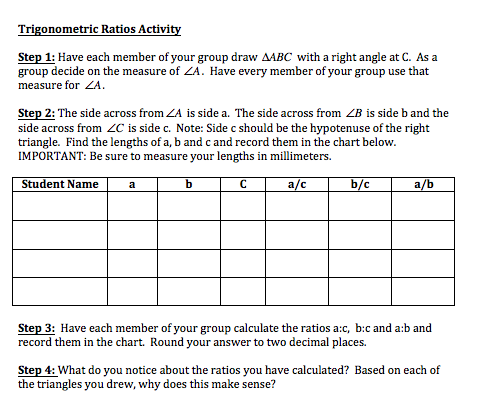 The world would be a utopia if the students could measure accurately with 25-cent rulers and 25-cent protractors.  But they haven't and can't.  How could I get more accurate measurements?

I was going to create a worksheet for them to do, but didn't quite have enough time.  (Both enough time in class and enough time to create the worksheet.) So, then I decided to create a screencast; it is uploaded to my youtube channel and I was planning on showing the 6 minute screencast in class. But since I really wanted students to experience the discovery for themselves, I led them through the activity as a whole class with each student working on his or her own laptop.

Students in my one class were initially surprised that we all got the same values, and when I asked them why this made sense, they understood!  Students chimed in that all the ratios must me equal,  because the triangles we had on our screens were all similar to each other by Angle-Angle similarity!

I think some students didn't find this too amazing, because as a class we decided what angle we would use and we all used the same angle.  Their feeling was "So, what?" Next year I still plan to lead the students through this activity rather than have them follow a set of typed directions.  However, I would have the data collected by table. I would have each table group choose what acute angles their right triangle would have.  This means there would be 5 sets of similar right triangles and they would see that it is not just one specific set of triangles where the sin ratio is the same, but the sin ratio is the same for any one given angle.