In my previous blog post, I talked about a problem that I showed to my students on the first day of school.  This problem was to get them to think about math from multiple perspectives and it was taken directly from the Stanford University MOOC that I took over the summer called "How to Learn Math".


How many squares do you see along the border?  Don't count them one by one. 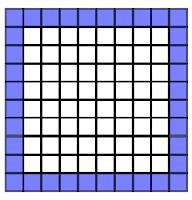 First, I told students to think about an answer and put their thumb up in front of them when they thought they had it. (A great idea I learned from the MOOC.)  Students didn't shout out answers in excitement and ruin it for others!  And those who normally would shoot their arm up in rapid fire speed didn't intimidate others in the classroom!  Next I called on students to explain how they found the answer.  The five different solutions that are shown here were obtained by by 3rd period class.
But then it dawned on me! (It only took the third time for me to teach this lesson to see it.)
202 - 182 wasn't that bad if you thought of it as (20 + 18)(20 - 18), a difference of squares!  My surprise was genuine and the fact that I didn't notice this right away wasn't so bad.  My third period students had a chance to see me think aloud through an idea, and they had a chance to see that I still get excited about math when I see something "new" that I hadn't seen before!
3)  How can graphing equations show these are equivalent expressions?  This one stumped my students and unfortunately, we ran a bit short on time for me to make sure they really got this idea.  However, in two of my classes I showed Desmos as a quick graphing tool.  [I became more acquainted with Desmos at NCTM in Denver in 2012. Thanks Desmos folks for the cool trivia prizes! I love my mint green Desmos t-shirt!]  We graphed y = 4x - 4 and y = x2 - (x - 2)2. A screenshot of the graph is seen here.

You might be wondering why only the first equation is graphed.  That is because I kept turning the second graph off and on in order for students to see that these two equations really produced the same graph.

Could I have incorporated other ideas, such as domain or the meaning of slope, into this lesson?  Yes.  However, my goal was to have my students begin to see math from multiple perspectives.  That goal was met.