Post 3 of Wally's Math Book: The Solution to the Grapefruit Problem

In my previous post I noted that one of the Wally's textbooks was explicity written to cover all of what was on the New York Regents exams, which still exist today - although the ones for January 2022 have been cancelled due to COVID-19.  What about these exams is so enduring that thay have lasted since 1865?  The exams have been cancelled multiple times more than once during the pandemic and that makes me wonder.  Are these exams really all that important? And if not, why administer them at all?  But I digress.

Here is the problem I had posted previously.  Did you try to solve it or give it to some students to try to solve?

Since I am a math teacher, I decided to approach this from an algebraic perspective. But then I got an equation that requires the quadratic formula and so I switched to using Desmos.  After you students try to solve it, see if they can follow my paper/tech combo solution.
In the next post, we will take a look at logarithms. They had a very practical use before the electronic calculator and I even have my grandfather's slide rule.
Posted by S. Leigh Nataro at 5:20 PM No comments:

This is the second post of a series of blogs devoted to my grandfather Wally's college freshmen math textbooks. One of the books Wally used was called Advanced Algebra. It was published in 1925 and in the preface it states the book is designed for students who have had one or two years of college algebra.  In addition, it states "The syllabi of the College Entrance Board, of the Regents of the State of New York, and of practically all states have been covered." This makes me wonder if there are college math texts today that take the New York Regents or Common Core Standards into account when designing their textbook.

In the previous blog post, I encourgaed people to try the following problem.  In addition to posting on twitter, I linked the blog post to the "Higher Education Learning Collective" Facebook group and was told by some that this problem was too easy to be a college level problem.  Here was that problem.

Problem 1: Prove that "The sum of the squares of any two unequal real numbers is greater than twice their product.  That is if a ≠ b, a2 + b2 > 2ab."

Here is essentially the algebraic proof as given in the textbook:

Here is a way to visually see that the sum of the areas of two squares is more than double the area of a rectangle formed by the sides of the squares by using Desmos - a much more dynamic and visually appealing proof.

And here's a link to the original Desmos page that I used to create the video above: https://www.desmos.com/calculator/r6p2hpdplf

How would you solve this problem?  Are there any generalizations you can draw?  Feel free to post in the comments of this blog post.  We'll look at at least two approaches to this problem in my next post.

As I opened up my grandfather's math books - Advanced Algebra by Edgerton and Carpenter, published in 1925 and Plane Analytic Geometry by Barnett, published in 1927 - I saw a piece of paper folded up.  I carefully opened it and realized it was the course syllabus! How exciting to see how a syllabus from the fall of 1927 compares to the current syllabi I write for the math classes I teach.  Before you read my observations about this document, I encourage you to look at it yourself.  Zoom in.  What do you notice? What do you wonder?  Feel free to add a comment to this blog post. 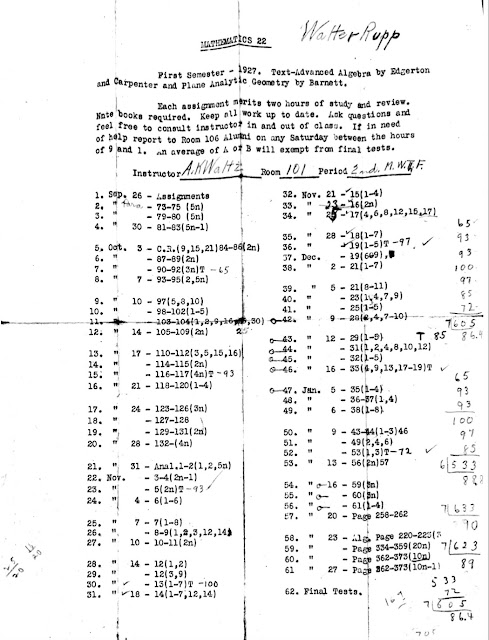 The paragraph at the top of the paper contains many instructions found in a typical syllabus.

What I Wondered
What did you notice and wonder about the syllabus?
Problem 1: This is not a problem that was assigned, but whas listed as a theorem on page 70 of Advanced Algebra.  It states "The sum of the squares of any two unequal real numbers is greater than twice their product.  That is if a ≠ b, a2 + b2 > 2ab."  Feel free to create your own proof and upload it in the comments or on twitter.  Make it an algebraic proof or a proof without words.  I have already started to work on a way to visualize this with Desmos and will share my solution in the next post.
Posted by S. Leigh Nataro at 4:52 PM No comments: